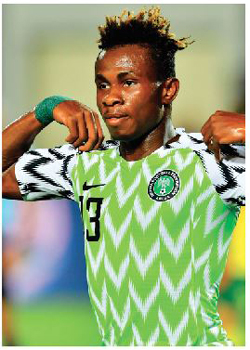 Nigeria’s poster boy at the Total Africa Cup of Nations Egypt 2019, Samuel Chukwueze, is confident about being crowned the best player on the continent in the foreseeable future in this frank conversation with Thenation’s MORAKINYO ABODUNRIN.

The was one of the bright spots in a relatively successful campaign with the Super Eagles at the Total Africa Cup of Nations (AFCON) Egypt 2019 and gifted winger Samuel Chukwueze has yet spoken about his drive for perfection as he keeps his fledging career running.

At this AFCON, he caught the eyes far and wide with his remarkable speedy dribbles and deservedly the youngest goal scorer at 20 years and 49 days with his first international goal; and the opener for Nigeria in the 2-1 defeat of South Africa in the quarter finals.

“One of the first things and the major thing that has kept me focussed  is my family especially when I remember where I was coming from,” the lively but soft-spoken 20-year-old Chukwueze stated in an exclusive interview with The Nation the day after the unfortunate 2-1 loss to Algeria in the semi-final. “I don’t want to fail because I know if I fail, my family has also failed. That is one thing that has kept me focussed on my career at both the club and national team levels.”

In only his first major tournament with the Super Eagles, Chukwueze clocked an impressive 482 minutes in six matches and capped it with a Man of the Match performance in the quarter final match against the Bafana Bafana of South Africa.

“It’s a great feeling to be in this team and I want to thank the coach (Gernot Rohr) for the opportunity to be part of this team to the AFCON in Egypt. It was not an easy task but I have a special feeling to be among the players for the tournament,” explained Chukwueze, a FIFA U-17 World Cup winner with the Golden Eaglets class of 2015.”It is a dream come true to be among the Super Eagles to the AFCON 2019 because I used to watch them on the television and dreamed about them even last year when they were playing at the Russia 2018 World Cup.

“It is so nice to be here among them this time around playing and laughing together. I feel so great.”

Now capped eight times for the Super Eagles, Chukwueze emphatically said his first goal at the 2019 AFCON would forever be etched in his memory.”My goal against South Africa will always remain special to me because it was my first international goal and in my first major tournament with the Super Eagles. I also feel very great to be voted as the Man of the Match (against South Africa) but I remain humble because this is just the beginning for me.”

Apart from doing well with the Super Eagles at Egypt 2019, Chukwueze’s fine form for his Spanish LaLiga side was rewarded in the Nigeria Football Federation (NFF) Awards with the Best Young Player last April and he reckoned such landmarks would keep him on the straight and narrow road to success.

“I’m so happy being declared as the Young Player of the Year and it means a lot for my career; it shows that I have greater years ahead of me if I keep working hard,” he noted.”I pray I keep my head straight and I’ll reach my goals if keep on working hard; this is just the beginning and I’m really happy about this award.”

Few months later, Chukwueze’s eye-catching performances with the Super Eagles at Egypt 2019 would certainly make him a strong contender for the elevated Young Player Award at the continental level but he is not oblivious about the impending challenges.

“Winning the NFF’s Best Young Player award was nice and it will be nice also to win the Best Youth Player at the next CAF awards but there are so many young players who are also doing well, so I can’t say I’ve done enough to win the CAF award but I will keep on working hard,” surmised Chukwueze, a great fan of two tennis legendary players in Roger Federer and Serena Williams.

Incidentally, in one of his earlier definitive interviews with this writer, Chukwueze had enthused about the prospect of hitting global acclaim like his mentors, adding that work and prayer are some of his success tips.

“I love playing footballs as well as cracking jokes; and catching fun with my friends,” noted Chukwueze who was blooded at Diamond Football Academy in Umuahia, Abia State.” There are other things I like too; I like playing and watching lawn tennis.

“I don’t like losing; losing a match can make me cry. I want to be a winner and I think I have the opportunity of learning new things by going to Europe.”

After his widely reported transfer along with Kelechi Nwakali was scuppered, Chukwueze, a  great mentee of retired Dutch winger, Arjen Robben, has  become a household name following some sensational performances with Villarreal since he made his league debut for the Yellow Submarines on 5th  November 2018, playing a 90-minute full play in a 1–1 home draw against Levante.

The first born with two other siblings, Chukwueze, according to Spanish influential tabloid, is one of the players in Europe’s top five leagues who have progressed the most in recent time with a market value of about 2.5 million Euros at the start of the 2018/19 season to over seven million Euros on current form. Yet, Villarreal has tied the player down with a release clause of about 40 million Euros – meaning he can only be prised away in a mouth-watering fee. “I’m still with Villarreal. I’m enjoying my time there because I have the opportunity of playing regularly. Maybe I can move to another club in the nearest future but it has to be where I can play regularly. For now, I have no reason to leave Villarreal; and I’m leaving everything in the hands of God.

“My dream as a player is to win major competitions at both the club and national team levels. Personally, it is my dream to be Africa’s best player one day and I know I can realise the dream if I keep working hard. I’m still young and I know I can achieve my dreams.”

Along with the likes of Victor Osimhen, Kelechi Nwakali, Orji Okonkwo, Chukwueze is proudly a member of Nigeria’s Generationext and he admitted the future of the Super Eagles is truly bright.

“I think the future of the Super Eagles is very bright and we can go far in the next FIFA World Cup in 2022 because we have a lot of young and talented players in the team,” he reiterated.”We have quality players like Victor Osimhen, Oghenekaro Etebo, Kelechi Nwakali and several others, and I believe we can go far if we keep working.

“For instance, my roommate here at the AFCON 2019, Victor Osimhen, is a fantastic guy and he has really helped me both on and outside the field even when he was not playing. He can be a little crazy but he’s such a fantastic guy; and really boosted my confidence at this AFCON.

“Victor and I have really come a long way from our days in the Golden Eaglets. Though he never played a game at this AFCON while we got to the semi-finals, he was not discouraged (Osimhen finally made his AFCON debut in the third place win against Tunisia when he came on as a second half substitute for injured Odion Ighalo).

“He’s one player I have so much respect for because he can convert even half chances. I think he has a lot to offer the Super Eagles in the future and I kept encouraging him to be ready anytime he’s given the opportunity by the coach,” noted Chukwueze.

‘I cease to be your fan’, says Fani-Kayode as he lambastes Anthony Joshua for prostrating for Buhari