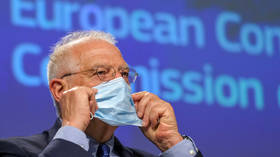 Foreign ministers from EU states agreed to toughen their strategy on China on Friday amid concerns about China’s new security law for Hong Kong, Reuters said. The ministers had a meeting via video link for the first discussion before two EU-China summits this year. One is expected at the end of June and another in September.

“We need, and are ready, to have an open and honest dialogue with China,” EU foreign policy chief Josep Borrell told reporters after the meeting. “There’s a lack of progress on negotiations (on market access for European companies in China),” Borrell said.

The bloc will prepare a new EU strategy document on China, as Brussels is trying to find a middle path between the US-Chinese rivalry.

Next month, the European Commission is expected to come forward with guidelines on ways for EU governments to potentially limit China’s access to public tenders in Europe. The move is seen as a way of putting pressure on Beijing.

BREAKING: EFCC: Why Magu is under probe – Presidency

Will Trump Go, If He Loses?